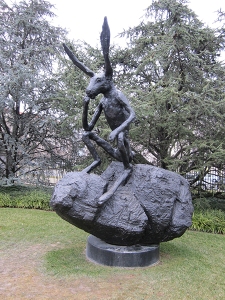 While The Thinker was crafted by Rodin around 1880, Welsh sculptor Barry Flanagan sculpted his own Thinker on a Rock inspired by Rodin’s work about a century later in 1997. Cast in bronze, a hare, not a man, with an elongated and thin form, sits atop a rock in the National Gallery’s Sculpture Garden. The hare’s long ears seem to extend upwards with its lanky, thin body hunched over in contemplation. While it may at first seem odd and unusual that a hare is sitting in such a humanlike position, Flanagan is actually known for his hare motif, which dominates his sculptures that are displayed in cities including Washington, D.C., London, Madrid, Dublin, and Chicago.

Barry Flanagan did not always sculpt hares. Initially, he sculpted with materials such as clay and sand after studying in London during the 1960’s. It was not until the late 1970’s that the artist met his inspiration when he saw a hare running on a field in England. He was interested in the elastic and elongated qualities of the hare, and this became his central and distinctive focus for the next three decades, which is not surprising given his reputation for being a unique artist of his time. With this said,  Flanagan set himself apart from his peers by focusing on theater and installation arts instead of Minimalist and Conceptual Art.  Neither artist nor viewer can deny the humor in the hare form being likened to human poses and characteristics. Flanagan certainly saw the humor and wit in depicting such a serious pose by Rodin and transforming it into animal form.

When walking up to the sculpture in the National Gallery’s Sculpture Garden in Washington, D.C., there is something odd yet comforting about seeing a hare in human form. The hare rests its chin upon its hand and its elbow upon its knee as humans so often do when lost in thought. Its long ears stretch in each direction, balancing the lanky form of the hare’s arms and legs. The eyes of the hare seem to stare back at the viewer in contemplation of what it is thinking as well as in uncertainty of the viewer. While this depiction is humorous in comparison to Rodin’s piece, Flanagan’s use of the hare form does have its ways of grabbing the viewer’s attention, getting them to stop, and think for a moment.

1 thought on “Barry Flanagan: Thinker on a Rock”